I’m just about the start my third term of fourth year. Yes, this will be my last term at University. Not sure what’s more upsetting, knowing I’ve nearly finished or thinking about all the exams I still have to come…

Anyway, first, as is tradition, I want to look back to the previous term and remember what I’ve done and learnt. Here are 2 things I learnt last term.

Last term I completed the biggest piece of coursework in my degree; a business plan and presentation. What’s more is that it was group work.

Normally you hear those two words and panic – not this time! We had a fantastic group and we smashed the work to get a fantastic grade. I learnt lots from the module, but one key lesson was taught to me by the team… design is important!

I remember, it was maybe a week before the deadline and we were 95% finished content-wise. Two of the team kept talking about how they were going to give it a nice design. I saw no changes in our google docs file as the week passed and I assumed they were going to touch up a couple of graphs and other small details. Another meeting passed without seeing them or any design changes, just messages saying they were working on the design and had to use the library computers for it. I had no idea what was going on. We completed the content and sat back, proud of our work.

Then it hit me. One of the guys sent across the first draft of the newly designed business plan. Within a split second, I suddenly realised how naive I had been regarding the actual look of the plan. It had never crossed my mind that we might want to take it out of the boring document structure and add some flare. Thankfully, this was group work and our team was ridiculously talented in many ways. Here’s the front cover of our final plan… 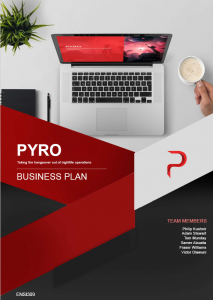 I was introduced to Jordan Peterson.

At this point, you’re either horrified, in love, or have no idea who I’m talking about. He’s been the centre of a lot of online debate and the guest of choice for a lot of controversial conversations. Now, if you don’t know him, DO NOT google his name if you aren’t willing to commit the next few hours to watch videos of him speaking. A lot of online media are taking quotes and categorising him. He holds some incredible ideas and some I disgree with, as with everyone, but his thought process, his logic and his understanding of structure and conversation is incredible.

I watch his videos to see how he gets from point A to point B. Interestingly, a lot of his opposition share the same goal of point B but they can’t see past where they disagree with point A. What he does so well is to break down opposing ideas and discuss the logic at each stage. Confirming the validity and not making assumptions. Only after doing this will he form an opinion and you can see exactly why he agrees or disagrees.

By doing this he is teaching himself more, he is validating certain thought processes and he is able to draw parallels across topics. All sounding a bit confusing? Watch his videos and then read his book “12 rules for life”. Agree or disagree with him? Let me know. The whole point is to encourage intellectual debate.